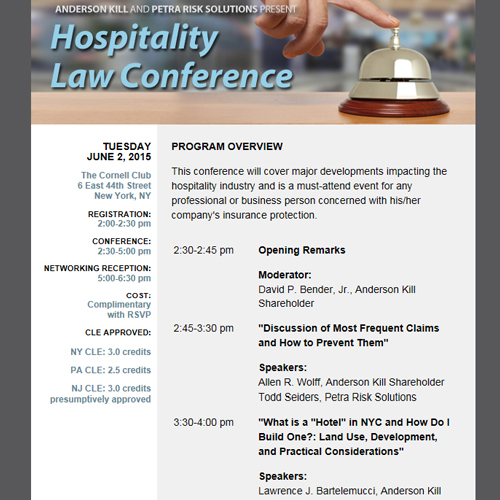 “Itâ€™s no wonder then the hotel industry has become a target of well-meaning legislators and bureaucrats looking to save some precious water for the state.

The California State Water Resources Control Board recently instituted new rules that among other things require foodservice establishments to provide water only to customers who request it and mandate hotels give an option to guests of not having linens and towels laundered daily.”

Letâ€™s face it: The hotel industry in the United States over the past 20 years has mostly been paying lip service to sustainability issues. Itâ€™s difficult to blame hotel owners and operators for that attitude because environmental issues are seldom major operational or profitability concerns at most properties.

There are exceptions, of course, but for the owner of a typical mid-market suburban hotel, green issues typically are only seriously addressed for one of two reasons: the vague promise of operating cost savings or the public relations glow generated by being a good and green citizen.

That situation is beginning to change, especially in California and the Southwest. The culprit is water, or the lack thereof.

“…An investigation after the electrocution death found that the poolÂ â€œdid not meet applicable city, state and national electrical codesâ€

and did not have Ground Fault Circuit Interrupters (GFCI) on the pool light system which are normal installations in pool construction to prevent electrical surges…Brown Electric Inc., had been hired by Hilton to bring the pool into compliance but, according to a city of Houston inspector, had performed work without obtaining the proper permits. After the death Hilton and Brown were cited for â€œuse of electrical system which constitutes a hazard to safety, health and public welfare.â€…”

In a lawsuit filed Wednesday, a Missouri City family alleges â€œgross negligence of epic proportionsâ€ for the swimming pool electrocution death of a young man at a Hilton Hotel swimming pool. Raul Hernandez Martinez, 27, and his family spent the Labor Day weekend at the Hilton Houston Westchase hotel at 9999 Westheimer in West Houston.

They were at the swimming pool at dusk when the lights came on automatically. Eyewitness accounts, and now a civil lawsuit, detail how an electrical current immediately surged through the water. David Duran, 11, â€œsuddenly cried out as his body convulsed and he began to float helplessly near the pool light in the deep end,â€ according to the lawsuit the family filed against Hilton Hotels and the Houston-area electrical contractor Brown Electric Inc., which had performed recent upgrades to the poolâ€™s electrical system.

The boyâ€™s mom Isabel Duran reached for her son and was shocked as well and knocked unconscious. She was revived via CPR and suffered several broken ribs when family members and bystanders dragged her from the pool. The boyâ€™s brother, Raul Hernandez Martinez then fought through the electrical current to retrieve his little brother and push him to the edge of the pool where others helped pull him out. “…Just over a month earlier, health officials had closed the pool when an inspection revealed the water had no chlorine and was cloudy a

spokesman for the health agency (stated)…It was reopened two days later after hotel management corrected the problem…firefighters conducted a grid search of the pool using a rescue hook and thermal-imaging camera but were unable to find (the victim), according to a fire department statement…”

The Seattle Fire Department is reviewing why its first responders could not find a Washington State University student who had sunk to the bottom of a murky hotel swimming pool and eventually drowned, The Seattle Times reported Friday. Tesfaye Girman Deboch, 27, died in the pool at the Quality Inn & Suites Seattle Center on June 30, after firefighters using a rescue pole failed to locate his body.

Officials for Public Health – Seattle & King County say the pool has a history of problems and should not have been open because of the murkiness of the water. The health agency has launched its own investigation, the Times reported.

“…the suit alleges Pheasant Run Resort and Spa, McArdle Ltd., and Oakbrook Hotels and Resorts should be held liable for the emotional distress caused to Carlos Escobar, who was 12 when he saw his stepbrother drown. Both lawsuits argue the resort failed to maintain the pool properly by

not posting emergency numbers or installing a phone at the pool…”

A Belvidere teen, who saw a relative drown at the Pheasant Run Resort in St. Charles more than five years ago, has sued the resort and hotel, claiming emotional distress. The suit, filed this month in Kane County court, is the second involving the Dec. 28, 2007, drowning of Javier Gonzalez, 21, of Garden Prairie, Ill.

A wrongful-death suit was filed in 2009 by the mother of the drowning victim. Daniel Murphy, a lawyer representing the plaintiffs in both lawsuits, declined to comment.

The suit also claims the resort was cited by the DuPage County Health Department at least seven times for not having a buoyed safety rope dividing the shallow and deep sections of the pool, and did not have proper lifesaving equipment on the deck.

According to the suit, Gonzalez was playing in the pool with four relatives, ages 12 through 15, when he became distressed and sank face down to the bottom near the drain. There was no lifeguard on duty and the children frantically called for help before going to their parents’ rooms for assistance, the suit states.

A Pheasant Run employee could not locate any rescue equipment, and Gonzalez was underwater for at least five minutes, the suit said. He was eventually pulled from the water, but CPR did not work and he was pronounced dead on arrival at Delnor Hospital in Geneva. Both lawsuits seek more than $50,000 in damages.

“…(plaintiff) was at the hotel waterpark and went down the â€œCycloneâ€ waterslide. When he stood up in the pool below the slideâ€™s trough, the complaint states, he was hit by another rider. The collision caused him to fall backward and sideways, striking his head and neck on the slideâ€™s trough…”

A Waukesha man has filed suit against Country Springs Hotel, saying it wasÂ negligent when it allowed a rider to travel down a waterslide after him, resulting in a collision. Robert and Dale Flowers, a married couple residing in Avalon Square Senior Housing in downtown Waukesha, filed a personal injury lawsuit Wednesday in Waukesha County Circuit Court against Country Springs Hotel. The couple is seeking unspecified damages from the incident that occurred nearly three years ago, according to the complaint.

The lawsuit claims Country Springs Hotel did not have a video feed available to employees to tell them when a rider cleared the slide. Instead, they have one employee at the top of the waterslide telling riders when to go and another at the bottom of the slide.

“…the attorney for the hotel owner, said the pool area complied with state law and asked the jury to consider

A jury in Hackensack on Thursday determined that a hotel owner was not responsible for a near-drowning that left a Georgia man brain-injured after he tried to rescue his daughter from the hotelâ€™s swimming pool.

The family of Robert A. Smith sued Ratan R. Park, LLC., owner of the Ramada Inn in Rochelle Park, for damages after Smith was overcome by water on July 4, 2009, when he tried to rescue his 11-year-old daughter, Brianna, after she drifted into the poolâ€™s deep end.

Smith remains in a nursing home with permanent brain injuries that an attorney for Smithâ€™s family said were the direct result of negligence by the hotelâ€™s owner.

In the trial before Superior Court Judge Charles Powers, Attorney Greg Haddad had argued that the poolâ€™s depth markings were inaccurate, its bottom was steeper than it should have been and the hotel owner failed to provide a â€œlife lineâ€ separating the poolâ€™s deep and shallow ends, presenting a â€œperfect stormâ€ for guests who couldnâ€™t swim.

Neither Smith nor his daughter could swim, and Oâ€™Hara in closing arguments on Wednesday in state Superior Court told the jury in the civil case that â€œboth had a duty to exercise reasonable care; they had an obligation to make reasonable observations.â€