What comes through loud and clear is that an executive traveler isn’t asking for high-priced service as much as high touch,” said Shawn Abaspor, chief executive of Vitesse Worldwide.

One of the world’s largest hotel companies is now letting guests post reviews on its hotel websites â€” even guests who aren’t happy with their stay. Starwood Hotels & Resorts Worldwide, whose hotel brands include Sheraton, Westin and St. Regis, recently unveiled a new feature to let guests write reviews that will appear on the hotel website. And the hotel company has encouraged guests to be honest.

Online hotel review sites are plentiful. But until now, hotels themselves rarely â€” if ever â€” post reviews by guests, said Kathryn Potter, a spokeswoman for the American Hotel & Lodging Assn., the trade group for the nation’s hotel owners.

“This is the first I’ve ever heard of a hotel posting reviews on their own site,” she said.

Only guests who type in their reservation confirmation number can submit reviews, and Starwood officials promise not to block negative reviews.

On the website for the St. Regis Monarch Beach Resort in Dana Point, most of the reviews are positive. But one mentions a problem with service. “When we first arrived, we waited five minutes for someone from valet to take care of us,” wrote a guest from North Carolina.

Â “…Firefighters scoured the hotel to ensure all guests and hotel personnel were evacuated. Another group of firefighters tried to determine the source of the fire, and a third group worked on freeing the pair trapped in the 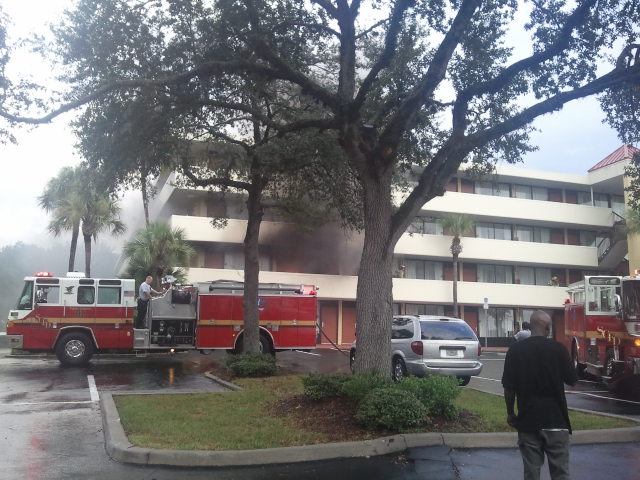 Firefighters evacuated several hundred guests at a 15-floor Hyatt Regency after two of the hotel’s floors began filling with smoke after an electrical fire, officials said. The incident was reported at 5 p.m., and seven engines, two ladder trucks and a battalion chief from Orange County Fire Authority responded to the hotel at 17900 Jamboree Road.

It was unclear whether the electrical fire melted down some equipment or if the equipment overheated to cause the fire, Stone said.

Â They got into an elevator and headed down from the rooftop terrace, but when another couple got in on the 16th floor, the compartment dropped and plummeted eight floors before stopping.

Janie Jones director Rosenthal tells Nymag.com, “We’ve all had a couple of drinks… and we’re just piling into the elevator… Everyone is yelling and hooting… (The couple) decide to jump in, and as soon as they jump in, the thing starts plummeting down. His girlfriend is lucky she didn’t get killed because her foot was barely inside the door when the elevator dropped. I think we fell eight stories before the emergency brake went off. We initially thought we’d gone all the way to the basement and bounced on the springs.”

Emergency services were called to the scene, but the frustrated group decided not to wait, and took action themselves, climbing out of a gap in the doors onto a floor.

Police have arrested two men and say a search has turned up evidence that there may be more victims of identity theft. Police say they have yet to determine how many vicitms there might be.

Just after noon on Tuesday, East Precinct patrol officers met a man in the lobby of the Silver Cloud Hotel in the 1100 block of Broadway. Officers went to the room and found two men.

In the room, they saw several cell phones, laptops, a WiFi hotspot, router and papers with credit-card numbers.

Detectives with the fraud, forgery and financial explotation unit got a warrant to search the room and the suspects’ vehicle.

“…43 of the 80 employees at Embassy Suites Irvine filed formal complaints with the Labor Commissioner about the rest-period issue. Of the seven hearings that have so far been held, all seven workers received awards

HEI Hospitality LLC, which manages the 293-room hotel, was recently ordered by a state Labor Commissioner hearing officer to pay $36,827 in back wages and penalties to full-time housekeepers who were denied 10-minute rest periods. The breaks are a legally mandated minimum standard in California.

Those housekeepers earned an average of $8.92 an hour before taxes. Their work included scrubbing toilets and showers, vacuuming, mopping floors on their knees, changing blankets and sheets, cleaning out microwaves, refrigerators and coffeemakers, taking out the trash, wiping down mirrors and counters and changing shower curtains.

The housekeepers said HEI would assign them workloads of 16 or 17 rooms to clean in an eight-hour shift, threaten them with discipline if they did not finish all their work on time and give them extra work such as cleaning hallways if they were seen standing around. Several of them were never made aware, as is required by law, that they had a right to take the breaks.

“..Â family says in a lawsuit that they were spied on while taking showers last year in an Albuquerque hotel…”

“…named as defendants are Wyndham Worldwide Hotels, a parent company of Ramada Inn, which used to operate the motel, as well as Bhakta, Gonzales and another employee, Gibi George, who had access to the maintenance corridor. The complaint says all three of them subsequently left their employment at the hotel…”

Eric and Evangeline Vigil and their two children â€” a 17-year-old son and an 8-year-old daughter â€” checked into the Ramada Inn, 2015 Menaul Blvd. NW, on April 23, 2010, during a weekend visit to Albuquerque to celebrate the teen’s birthday, according to a lawsuit filed Tuesday in state District Court.

The complaint says the wife was given a “special rate” for Room 135 when she and the children checked in. The hotel staff were unaware that they were later joined by her husband, the lawsuit says.

While taking separate showers the next morning, each family member heard noises coming from behind the wall of the shower stall. When the father examined the area around the fixtures, the complaint says, he noticed a hole under the faucet.

The complaint says when Vigil went into the hallway, he noticed a maintenance door next to his room door.

According to the complaint, the general manager, Sanketkunar Bhakta, told Vigil “the maintenance guy” had been fixing pipe behind the door, but after Vigil called police, Sanketkunar told the officers that he and another employee, Sergio Gonzales, were fixing a sewer line. Subsequently, Bhakta changed his story and claimed that he and Gonzales were fixing television cables in the corridor, the complaint says.

An inspection of the maintenance corridor found insulation had been removed from the wall behind the shower stall “to afford a clear line of sight into the shower stall” and that a plastic bucket was placed there to provide a place to sit while spying through the peephole, the complaint says.

“…Some hotel Internet service providers are proposing a solution that offers tiered Wi-Fi service. The lowest level, suitable for basic Internet requirements like checking e-mail, would be free, but other levels would be priced depending on bandwidth requirements…”

Largely because of the broad use of iPads and other mobile tablets, which are heavy users of video streaming, the guest room Wi-Fi networks that most hotels thought they had brought up to standard just a few years ago are now often groaning under user demands.

â€œThe iPad is the fastest-selling device in consumer electronics history, and because of it the demand placed on any public place Wi-Fi system has gone up exponentially in the last year and a half,â€ said David W. Garrison, the chief executive of iBAHN, a provider of systems for the hotel and meetings industries.

This means more hotel customers are unhappy with their Internet connections. Hotel owners, meanwhile, who are digging out from a two-year slump caused by the recession, will probably have to invest more money to provide more bandwidth.

For travelers, it may mean still another fee, since hotels will be paying their own Internet bills.

The Hotel LEP was launched in October 2010, and during the first year of the initiative, OSHA limited enforcement inspections to hotels in the Virgin Islands.Â According to an OSHA Region 2 official, the agency started in the Virgin Islands because of a high number of reports of workplace injuries at hotels in that area.Â Since the start of the LEP, OSHA has essentially inspected a different hotel property each month to month and a half.Â The hotel properties subject to LEP inspections have ranged from locally-owned motels to multinational hotel chains.

Most Frequently Cited Standards in the Hotel Industry in 2010

The owner of a long-troubled Santa Cruz area inn is headed to trial on charges that he mishandled workers’ compensation and committed insurance fraud.

Sanjiv Kakkar, owner of Brookdale Inn and Spa, is accused of dissuading an employee from seeking workers’ compensation after a work injury, fraud and making false claims. He is charged with two counts of insurance fraud, failure to maintain workers’ compensation insurance and passing off bad checks, according to Kelly Walker, a prosecutor with the Santa Cruz District Attorney’s Office.

Kakkar appeared in court Friday with his attorney, Peter Leeming, to set a date of March 12 for a jury trial. A court date was also scheduled for December for a motion to consolidate the case with a second criminal case involving Kakkar. The latter case involves misdemeanor violations of health and safety codes.

Leeming said he is looking forward to finally taking the case to trial after multiple delays.

“…The amount of water that comes out of a fire sprinkler head can fill a bathtub in 2 minutes. Sometimes guests panic and don’t report the problem immediately which results in serious water damage. Or worse, the sprinkler water shut off system is in a room with a locked door…” 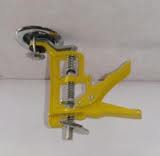 More than once a wedding gown has been ruined just prior to the wedding by an unsuspecting bride-to-be hanging her dress from the sprinkler head. It is not hard to imagine. Wedding dresses with their long trains often don’t fit properly in closets. The sprinkler head looks high enough that once hung there the dress will not wrinkle. Unfortunately, when a sprinkler head is activated the dress is ruined beyond repair.