“…a Toronto Hilton employee saw a leak during a routine test on the hotelâ€™s emergency generator equipment.

As he leaned in to get a better look, his hand slipped into a fan. The fanâ€™s blades cut off his fingers…”

A hotel company has been fined $70,000 after one of its workers lost some of his fingers on the job.

The court added a 25 per cent surcharge to the fine, which goes toward a provincial government fund for victims of crimes. 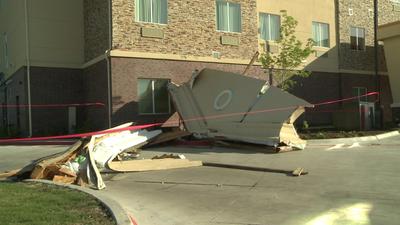 “…about 25 percent of the roof had become separated, and he said it is a possibility that more could become detached as the storm progresses…”

Earlier this evening, high winds damaged the membrane roof of the DoubleTree Hilton Hotel in Middleton and Danvers. Some of the roof started to separate, and the hotel is experiencing water damage as a result.

A few hotel guests staying on the recently renovated 8th floor were moved because of the water damage.

â€œThe hotel staff is working to mitigate any water problems inside the rooms but as far as the actual roof repair that cannot be undertaken until the storm is over,â€ said Twiss, who said it would be too dangerous at this time.

“…Only about half of computer users make complex passwords for themselves…In the first six months of 2012 alone, hackers stole over 30 million passwords on hacks of just three online services: eHarmony, Zappos and

lawyer-friendly LinkedIn. Another recent survey, unconnected to the Norton survey, concurrently found that password theft is up 300 percent in 2012…”

The 2012 Norton Cybercrime Report is now out and it points to an incomprehensible laziness on the part of American computer users when it comes to using passwords.

According to this report, nearly three-quarters of adults have been the victim of a cybercrime (averaging a little under $300 per incident), totaling over 70 million people. The worldwide annual total of cybercrime is estimated at $110 billion.

That is coupled with two other problems: people use the same password for multiple functions, and people use passwords that are, in and of themselves, too simple.

The Norton survey was conducted with 13,000 adults in 24 countries. It found that nearly half of those responding do not use a password that combines phrases, letters, numbers, capitalized letters, lower case letters and symbols, which create complex passwords that are far more difficult to hack than passwords that do not have those things.

The survey showed that nearly a third of all respondents have been notified by an email service, social network, or bank to change their passwords. The bank figureâ€”13 percentâ€“â€“is particularly alarming, implying that nearly one in eight people have had their bank account passwords compromised.

Seventeen percent of people store passwords to other accounts inside another password-protected account. Once one password is stolen, the keys to those other accounts are included.

“…Investigators say over the last year or so, overheating from a commercial stove led heat to creep up a wall

and into the attic of the building, getting wood hot enough to finally catch fire…”

An overheated stove led to the fire that caused $75,000 in damages to a Genoa restaurant Friday morning.

Douglas County investigators say shortly before 9AM, they got the call about the fire at the Genoa Station Grill and Bar, a business about 18 months old near Genoa Town Hall.

The fire broke out in the kitchen area and was contained to the kitchen and attic area. SR 206, which runs through Genoa , was closed for about two hours. No one was hurt.

“…FLSA-covered employees, who in some cases worked as many as 72 hours in a week, were paid a fixed salary without overtime compensation for hours beyond 40 in a week. In addition to overtime violations, this

practice resulted in minimum wage violations because employees did not always receive at least the federal minimum wage of $7.25 per hour. Investigators also found that wait personnel were required to turn their tips over to management at the end of every shift, which caused their pay to fall below the minimum wage. Finally, the employer did not keep proper records as required…”

The U.S. Department of Labor has filed a lawsuit against Tulsa-based El Tequila LLC and owner Carlos Aguirre after an investigation by the department’s Wage and Hour Division found that the defendants violated the Fair Labor Standards Act’s minimum wage, overtime and record-keeping provisions. These violations resulted in a total of approximately $1 million in unpaid wages owed to 221 kitchen and wait staff, hosts and bussers at four restaurant locations.

The suit was filed in the Northern District of Oklahoma, Tulsa Division, and it seeks to recover the full amount of back wages for the employees as well as an injunction prohibiting future violations of the FLSA.

“The restaurant industry employs some of our country’s lowest-paid, most vulnerable workers,” said Secretary of Labor Hilda L. Solis. “When violations of the FLSA are discovered, the Labor Department will take appropriate action to ensure workers receive the wages they have earned and to which they are legally entitled.”

Violations were found at the company’s restaurants on Memorial Drive and South Howard Avenue in Tulsa, East 86nd Street North in Owasso and North Elm Place in Broken Arrow.

The FLSA requires that covered, nonexempt employees be paid at least the federal minimum wage of $7.25 for all hours worked, plus time and one-half their regular rates for hours worked beyond 40 per week. In accordance with the FLSA, an employer of a tipped employee is required to pay no less than $2.13 an hour in direct wages provided that amount plus the tips received equals at least the federal minimum wage of $7.25 an hour. If an employee’s tips combined with the employer’s direct wages do not equal the minimum wage, the employer must make up the difference. Employers are required to provide employees notice of the FLSA’s tip credit provisions, to maintain accurate time and payroll records, and to comply with the act’s restrictions applying to workers under age 18.

“…The cause…was believed to derive from a small under-the-counter appliance in the kitchen… total assessed damage is around $40,000, half in structural damage and another $20,000 in restaurant contents, including

â€œWeâ€™re really grateful the sprinkler system was in place,â€ Greer said. â€œIt took less than 15 minutes for the fire to be out.â€

The building, owned by Michaelâ€™s Properties, which owns several other buildings downtown, is worth well over $4 million and the damage was mostly contained to Mega Bite, Greer said.

Minor water and smoke damage resulted in the apartments on the first floor as well.

“…it (was)…difficult to see a drainage hole in the parking lot. When he stepped in the hole, Wright says he tore

An Oâ€™Fallon hotel is being sued after one if its guests allegedly hurt his knee when he stepped in a hole in the hotelâ€™s parking lot. Samuel Wright filed a lawsuit Oct. 5 against Kingston Hotel Group LLC in St. Clair County Circuit Court.

According to the petition, Wright and his family were staying at the Candlewood Suites in Oâ€™Fallon in July 2011. Wright says he left the hotel through the west exit door to go to his car in the parking lot. The surface of the parking lot was exceptionally dark, Wright claims, because of some asphalt sealant the hotel had applied to it.

Wright accuses Kingston Hotel Group, the owner of the hotel, of negligence for allegedly failing to warn guests of the potential hazard in the parking lot. He asks for more than $50,000 in damages for medical expenses and court costs.

leak. After the guest followed the directions, the caller hung up…”

For the second time this year, a Leland hotel has suffered extensive damage because of a prank phone call. Leland Police say early Sunday morning, someone called the front desk of the Best Western off US 17 and asked to be transferred to a room.

The same thing happened to another guest in the hotel back in May. That prank flooded the first two floors of the hotel and caused thousands of dollars in damage.

Leland Police detectives believe this prank may be only one of many nationwide, as was the case back in the spring. Detectives are investigating any and all leads and plan on possible collaboration with federal officials to aid in this investigation.

Why 100’s of thousands of tourists are vulnerable to theft or worse.

Under the Patient Protection and Affordable Care Act, companies with 50 or more full-time eligible workers must either provide basic coverage by Jan. 1, 2014, or face fines of $2,000 per employee. A full-time employee

is defined as one averaging 30 or more hours per week over a 60-day period.

Farmington Hills-based Ansara Restaurant Group, which operates 22 Red Robin outlets and five other restaurants in Michigan and northern Ohio, is bracing financially to expand its health insurance benefit program by as many as 665 full-time workers to accommodate expected federal health care reform.

The first 30 employees are excluded from the penalty. For example, an employer with 75 employees would pay the penalty for 45 workers, or $90,000.

Eligible employees that reject insurance coverage by their employer would have to pay a $95 tax, or 1 percent of income, whichever is greater, in 2014. The tax rises to $325 in 2015 and to a maximum of $695, or 2 percent of income, in 2016. Family coverage taxes would be about three times higher in those years. The penalty is estimated to raise $6.9 billion in 2016, said the Congressional Budget Office.

Ansara said his company covers about 130 management staff with various plans from Blue Cross Blue Shield of Michigan and Blue Care Network. Only about 35 of its estimated 350 eligible hourly workers have opted for the coverage, he said.

“It is very difficult to plan when we don’t know what our health care costs are going to be in 2014,” he said. “To comply with the regulation, we have to offer coverage to all full-time eligible employees.”

Of Ansara’s 2,300 employees, up to 700 hourly workers could become eligible for health insurance coverage, he said.