California’s Division of Occupational Safety and Health has adopted a new rule to help reduce injuries for hotel housekeepers.

Cal/OSHA’s Occupational Safety and Health Standards Board approved the rule in a 5-0 vote on Thursday.

The rule will require employers to establish, implement and maintain an effective written musculoskeletal injury prevention program that addresses hazards specific to housekeeping, according to Cal/OSHA. 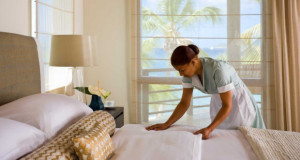 “Hotel housekeepers are the invisible backbone of the hospitality industry,” Pamela Vossenas, New York-based director of worker safety and health for union Unite Here, said Friday in a statement. “Overwhelmingly women, immigrants and people of color, housekeepers face high rates of workplace injury. The state of California has recognized the seriousness of the dangers housekeepers face and took an important step to protect these workers.”

Lifting 100-pound mattresses and pushing heavy carts and vacuums can lead housekeepers to suffer strain, sprain and tear injuries that can require physical therapy or even lead to permanent disability, according to the union, which first petitioned Cal/OSHA to develop a standard to protect hospitality workers from injury in 2012.

California’s state-run OSHA program has proposed a standard to prevent musculoskeletal injuries among hotel housekeepers. Read on to find out more about the effort and how long it’s been on the drawing board. 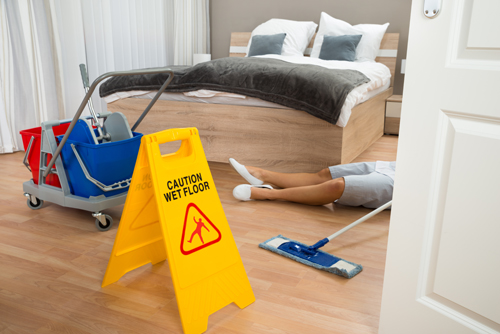 For years, advocates for hotel housekeepers have been pushing for a regulation to protect these workers, who are exposed to significant risks on the job. In January 2012, the union UNITE HERE filed a petition with the California Occupational Safety and Health Standards Board (OSHSB) requesting the adoption of a standard to address a variety of hazards, including limiting the square footage that can be assigned to a worker during an eight-hour shift.

If you are near Anaheim, CA, you don’t want to miss CH&LA’s annual seminar on the new laws affecting hoteliers in 2017.

Our very own Todd Seiders, Director of Risk Managment, will be presenting at the seminar. 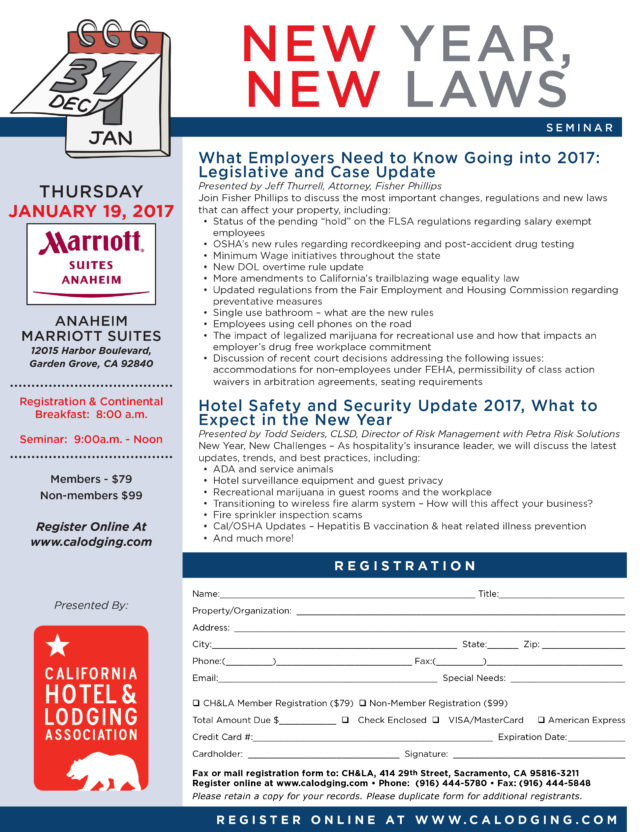 Comments Off on Petra will be at CH&LA’s New Year, New Laws Seminar – Anaheim

Federal regulators and hotel employees are calling for new safety measures after a worker was found dead inside a walk-in freezer at the Westin Peachtree Plaza in downtown Atlanta.

Investigators believe Carolyn Mangham spent about 13 hours at temperatures below minus 10 Fahrenheit. Her frozen body was found after her husband called the hotel to report her missing.

Devices should be placed inside the large freezers so that anyone trapped or injured inside could send an alarm directly to hotel security or emergency services, union leaders say.

Hotel employees also want to carry “panic buttons” to alert others to emergencies. 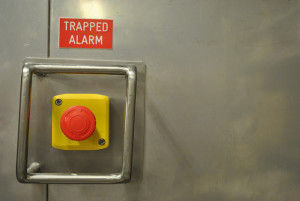 “At the end of the day everyone deserves to go home to their families,” said Wanda Brown, who worked with Mangham at the hotel and is president of the Atlanta chapter of the UNITE HERE union.

“We’ve given our demands to the hotel and we are waiting for a response, but we will not stop asking for these things to be done,” Brown said.

The U.S. Occupational Safety and Health Administration is proposing about $12,500 in penalties for a serious safety violation in the death of Mangham, 61, who also went by Carolyn Robinson.

In a Sept. 23 letter, OSHA recommended that the Atlanta hotel voluntarily develop a system of “notification and ongoing communication” for workers entering the walk-in freezers. The agency also recommends the hotel develop a system to periodically check on employees during their shifts.

“The OSHA report is part of an ongoing process and we are planning to contest their findings and recommendations,” Carrie Bloom, a Starwood spokeswoman, said in a statement Wednesday night. 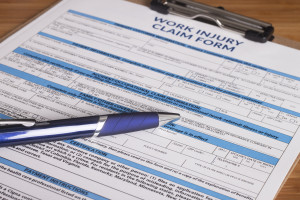 Employers with 20-249 employees in certain industries must electronically submit their Form OSHA 300A information for the year 2016 by July 1, 2017. Hotels (except Casino Hotels) and Motels, NAICS code 7211, are included in the “certain industries” listing.

OSHA State Plan states must adopt and enforce these requirements (or substantially identical requirements) within 6 months after the publication of the final rule.

If an OSHA inspection occurs and your organization is required to keep an OSHA 300 log, you will need to present a copy during the inspection or within 4 hours of OSHA’s request for the log.