“Seventy per cent of all injuries on jumping castles occur from falls, most of these result in fracturesâ€¦ there can also be concussions,”

“…Three children in the UK were seriously injured after a jumping castle they were playing in was lifted off the ground by a wind gust before crashing into a telegraph pole….”

Seven-year-old Koby Dakin, his brother Kyle Dakin, 10, and eight-year-old Imogen Wright were thrown into the air after winds exceeding 60 km/h ripped the castle from its supports during a christening party at the White House Hotel in Whitby, North Yorkshire, at the weekend.

Mr Youngâ€™s son Koby was airlifted to hospital suffering a broken leg, two arm fractures, a broken rib, punctured lung and head trauma, while his older brother was treated in hospital for a leg injury.

Imogen Wright was hospitalised with head injuries and a concussion.

“…Hotel workers needing urgent help could use the panic buttons to contact the hotel’s front desk or its security, then police could be called if necessary…”

“…assaults may be undercounted, experts say, since workers may fear being sacked and employers, mindful of insurance, might not want to report assaults that are not severe….”

Â Assemblyman Lancman, who chairs the Assemblyâ€™s subcommittee on workplace safety, said attacks on hotel maids and housekeepers were relatively common although he had no data to support that.

In 2009, 100 hotel maids were assaultedâ€”70 by people, 30 by animalsâ€”according to the U.S. Bureau of Labor Statistics.Â But assaults may be undercounted, experts say, since workers may fear being sacked and employers, mindful of insurance, might not want to report assaults that are not severe.Â

“….Hotel management discovered Hunter had been stealing for some time, the affidavit claimed. Officials found Hunter would check guests in and adjust off cash payments in the computer, then take the money...”

A 30-year-old woman is suspected of stealing more than $3,000 from a Burkburnett business she worked for. On May 13, police were contacted by a representative of Sunway Hotel Management. The person said an audit of the property found money had been taken from the hotel safe, and from cash transactions.

The representative said Hunter, the general manager, said she had borrowed the missing money to pay for a child’s doctor bill, and would return it when she got paid. She was told she needed to come to the hotel to discuss the issue but never showed up.

A total of $2,618 in cash payments had been taken that way, allegedly all by Hunter. The total reached about $3,268 including petty cash from the safe.

Comments Off on Hospitality Industry Employee Risks: Texas Hotel Manager Arrested For Theft As Guest Cash Payments Were Adjusted In The Computer

“…Nordstroms’ President, Blake Nordstrom, announced that some 5,000 hand held devices will be in the hands of Sales Associates by this July…” 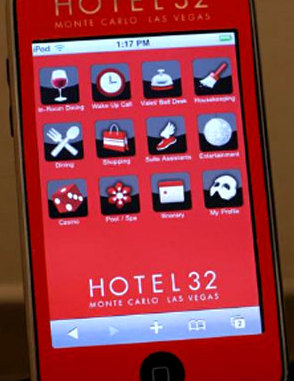 “…everyone is in Guest Services…no more Front Desk â€“ we have a Concierge Center. Check folks in right there on your hand held, take their credit card impression, dispense the â€œroom key cardâ€, via e-mail, and the bar code will open the Guest Room door, plus be used for all Hotel charges â€“ spa, restaurant, golf, etc…”

Â Nordstromâ€™s credo is exceptional Customer Service, and,Â  Â for those of us who have waited in line or even tried to find a Sales Associate in these large stores, the mobile application is just great.Â  By the way, Nordstroms just posted a 6.5 percent increase in first-quarter same-store sales.

Many operations already have the option of Kiosks, but they are so impersonal.Â  Get your people out from behind their desks (those barriers), meeting, greeting and rooming your Guests.Â  This is the â€œpersonal touchâ€ in a technical world, and, watch, in 3-5 years this is what it will look like.

“…Hotel housekeepers say they often feel a twinge of fear when they slide the key card, turn the door handle and step into a room to clean it. What will they find?…”

“…Many more (incidents) are hushed up, labor groups say, because the victims are illegal immigrants or because hotels are wary of scaring off guests. Many hotels laid off security staff during the recession, leaving workers even more vulnerable…”

For Argelia Rico, it was a naked man who touched himself as he ogled her. For Kimberly Phillips, it was a pair of dogs that tore into her leg.

Last week the former head of the International Monetary Fund, Dominique Strauss-Kahn, was charged with chasing a housekeeper around his $3,000-a-night penthouse suite and forcing her to perform oral sex on him at the Sofitel hotel in New York.

Labor groups and hotel housekeepers have reported at least 10 other such incidents in the United States in recent years, from Gaithersburg to remote Grand Island, Neb.

â€œItâ€™s dangerous work,â€ said Yazmin Vazquez, who works at a hotel in downtown Chicago. â€œThese customers think they can use us for anything they want, because we donâ€™t have the power that they have or the money that they have.â€

A San Francisco police officer accused of stealing items from a manâ€™s residential hotel room following a drug arrest has been captured on video in a second incident, appearing to leave a residence at the Julian Hotel with property never booked into evidence.

The video, released Tuesday, May 17, by San Francisco Public Defender Jeff Adachi, comes less than a week after Adachi released surveillance footage documenting a similar incident on Dec. 30 at the Jefferson Hotel.

In the most recent video, officers can be seen walking into the building empty-handed. However, Guerrero is later seen leaving with property that appears to be consistent with a laptop inside a bag, which was confirmed missing from the room later that day along with a camera. Vargas is carrying a second bag containing unknown items. Neither bag was booked into evidence.

Officers arrested resident Jesus â€œJessieâ€ Reyes, 64, for possession for sale of methamphetamine. Prosecutors dropped the charges against Reyes May 4 after Guerrero failed to show up to testify despite a subpoena. Reyes had never before been arrested, said his attorney, Deputy Public Defender Cindy Elias.

Hospitality Industry Pool And Spa Risks: Family Of Man Who Drowned After Being "Sucked Into Hotel Whirlpool Drain" Sues For "Negligence, Emotional Distress And False Imprisonment"

The family of a man who met a bizarre and tragic end by being sucked into a jacuzzi at a Bahamian resort is suing the hotel for negligence, emotional distress and false imprisonment.

There was no emergency shut off button nearby and other guests tried in vain to save him.

‘No Sandals employees were either trained or willing to provide CPR for the 45 minutes or more that transpired before an ambulance arrived.’

John Van Hoy Jr, 33, died on December 28, 2010 after he was sucked into the drain of the hotel’s whirlpool and drowned while workers allegedly ignored his fiancÃ©e’s cries for help. His family are suing the Sandals Royal Bahamian Resort, its American-based marketing firm, and the companies that built or supplied parts for the whirlpool.

According to Courthouse News Service, Mr Van Hoy was ‘in excellent shape, and could bench press over 300 pounds’, but when he dunked his body underwater he got caught in the whirlpool’s suction drain and could not free himself. His fiancÃ©e was said to be relaxing nearby when she noticed he did not come up for air.

She screamed for help, then jumped into the pool to try and save him herself after she claims that staff ignored her, but she was unsuccessful. The suit says: ‘Nicole Cleaveland then sought the help of a Royal Bahamian employee who ignored her pleas for help and walked away.’

When he was finally freed, the suit says that it took an ambulance 45 minutes to arrive and there was no one on site to administer CPR on Mr Van Hoy.

He was pronounced dead when he arrived at hospital. According to Miami New Times, the complaint also alleges that after the death, the phone was removed from Miss Cleaveland’s room, and that she was interrogated by hotel staffers who tried to get her to admit that either she or Mr Van Hoy was responsible for his death.

The complaint says: ‘In the final moments of his life, John Van Hoy Jr experienced unimaginable conscious terror and utter foreboding doom – all of which was exacerbated by him knowing that his [fiancÃ©e’s] efforts to save him had failed.’

The family are seeking damages for negligence, intentional and negligent infliction of emotional distress, false imprisonment and product liability.

Scores from annual inspections of more than 70 Northern Kentucky hotels and motels can now be found online.

Information on the inspection process, along with the scores, can be viewed on the Northern Kentucky Health Departmentâ€™s website. 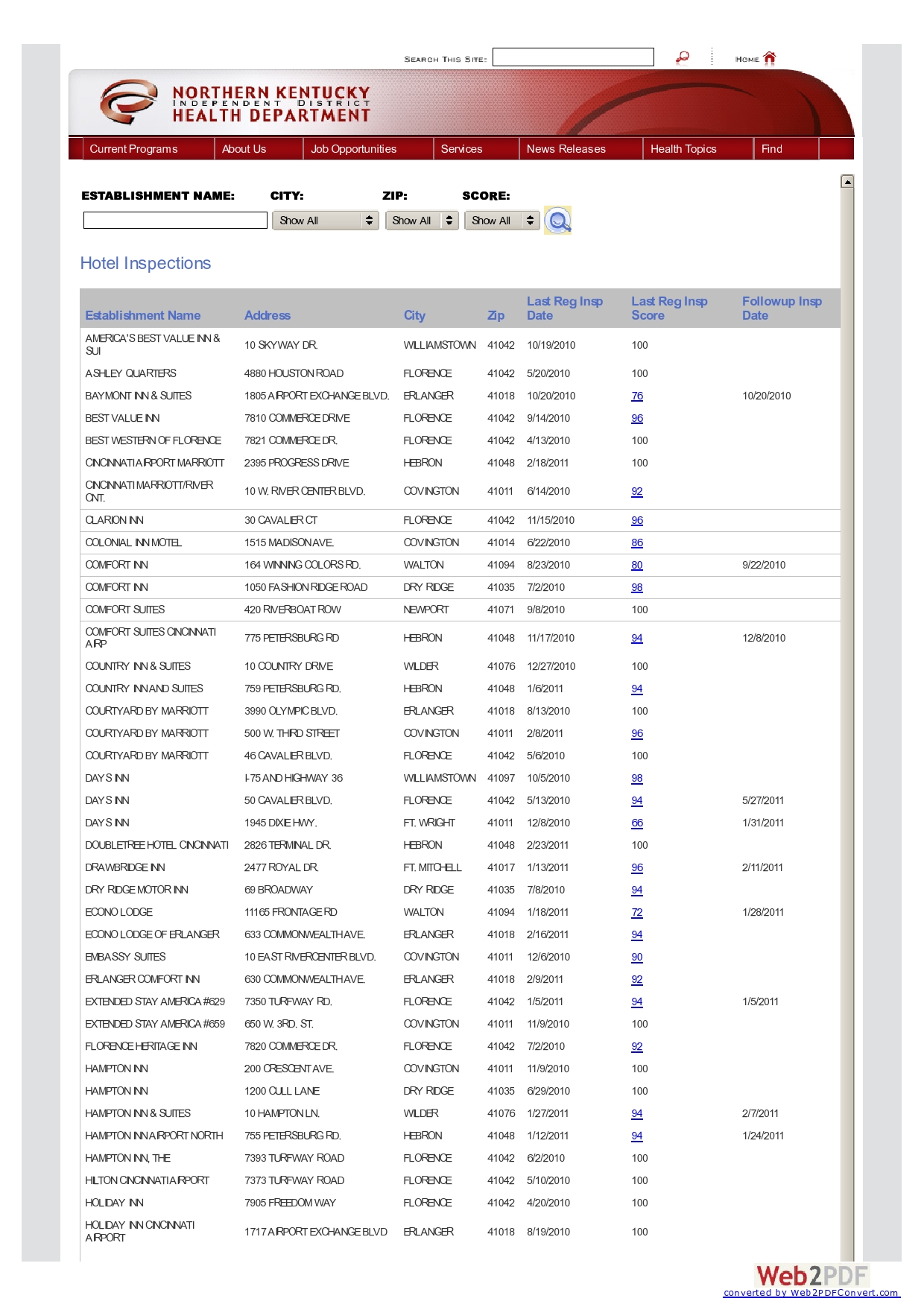 “…Â They contend that flat sheets cause workers to strain their backs, shoulders and wrists, and are often responsible for repetitive motion injuries…”Â

“..But the California Hotel and Lodging Association says replacing existing sheets to comply with the bill could cost between $30 million and $50 million…”

“…Hotel operators argue they will need to purchase new equipment in order to launder the fitted sheets. They also say fitted sheets will have to be replaced more often, that the elastic in fitted sheets breaks down faster than fabric, and that fitted sheets cost more to iron, fold and store…”

The California Legislature is considering a bill that would regulate what type of sheets can be used on hotelÂ bed mattresses across the state. State Bill 432, sponsored by Sen. Kevin de Leon (D-Los Angeles), also calls for the use of long-handled tools like mops and dusters so housekeepers do not have to get down on their hands and knees to clean bathroom floors.

â€œJust by using fitted sheets you could cut the number of lifts in half, and we think that would go a long way in preventing worker injury,â€ said Leigh Shelton, a spokesperson for UNITE HERE, a union that represents California hospitality workers.